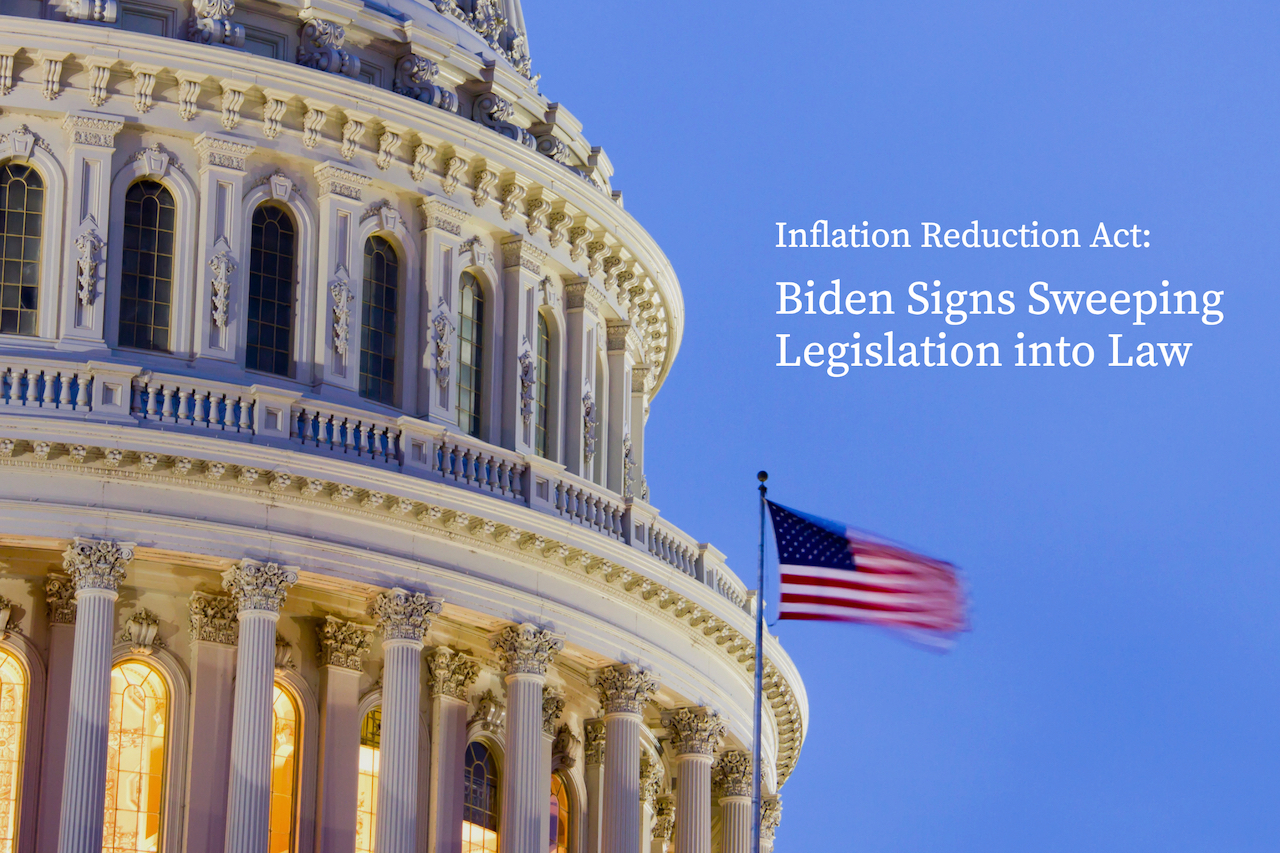 What it Means for Climate Change, Health Care, and Taxes

No Republican lawmakers voted for the bill, and it required a tie-breaking vote in the Senate by Vice President Harris in order to go to Biden’s desk. The legislation was a year in the making, and it contains measures aimed at combatting climate change, increasing tax revenue, and lowering health care costs for Americans. That sounds good, but what does it actually do for the record-high inflation numbers we have seen this year? Critics of the bill argue that it is counterintuitive in the long-run because of the billions in government spending it requires and the stifling of gross national profit through higher corporate tax.

Below, we have a high-level summary of some of the measures taken via the Inflation Reduction Act and how Americans may feel it impacts them now and in the future.

For a more detailed analysis of the bill, the Tax Foundation published this article sharing projections on how the bill will affect the U.S. budget window from 2022-2031.

Democrats struggled to make the legislation a reality after conservative Democratic Senator Joe Manchin of West Virginia pulled his support. At the time, Manchin cited concerns over approving more spending measures during a time of record inflation. However, Manchin and Senate Majority Leader Chuck Schumer, D-NY, resumed talks in July and struck a deal.

“The American people won, and the special interests lost,” Biden noted during the bill signing, with Manchin joining him on the dais.

What the Inflation Reduction Act Means for Health Care

When Biden mentioned special interests losing, he was referring to pharmaceutical companies. Many had lobbied against measures in the bill related to Medicare prescription drug costs. That’s because the new law enables the federal health secretary to negotiate the prices of some prescription drugs for Americans on Medicare, leading to lower prices for consumers.

The law also caps out-of-pocket prescription costs for Medicare Part D recipients at $2,000 annually. This cap goes into effect in 2025 and, combined with lower prescription drug costs, it is expected to lower health care spending for more than five million Americans.

Additionally, more than three million diabetic Americans on Medicare are now guaranteed that their monthly insulin costs will be capped at $35.

Finally, the Inflation Reduction Act also provides a three-year extension on the Affordable Care Act (ACA) health care subsidies that were created in 2021 as a pandemic relief measure.

The Inflation Reduction Act set aside more than $300 billion to be invested in energy and climate reform measures. This gives it the distinction of being the largest federal clean energy investment in American history. In short, it’s the most significant step the U.S. has taken toward addressing climate change.

The law includes a $60 billion allocation to boost renewable energy infrastructure in the manufacturing sector, related to things like wind turbines and solar panels. It also created tax credits for electric vehicles, solar panel systems, and other measures to make homes more energy efficient. These tax credits take effect immediately, and the White House has plans to unveil an interactive website that allows individuals, families, and small businesses to easily access information about the tax credits.

The Biden administration and Democratic congressional leaders say the collective measures will reduce greenhouse gas emissions by 40%, based on 2005 levels, by 2030. However, this still falls short of Biden’s original goal.

Energy efficiency tax credits aren’t the only tax measure in the new law. The Inflation Reduction Act also established a 15% minimum tax for all corporations earning $1 billion or more in income. This is expected to bring in more than $300 million in revenue.

Critics have noted that the legislation paves the way for 87,000 new IRS agents to be hired. This could disproportionately impact middle-class Americans and small businesses through increased audits.

Read Article: Strategies for Building Wealth In Your 50s

What’s NOT in the Legislation

Democrats initially hoped the new law would include funding for childcare, universal pre-K, and paid family leave. All of these items were dropped as negotiations with Manchin played out.

Additionally, and despite the law’s moniker, it does little to address inflation – at least in the present. The Congressional Budget Office reports that the Inflation Reduction Act will have a negligible impact on inflation in 2022 and into 2023. The Biden Administration says the combination of deficit reduction measures, higher taxes, and new green energy revenue streams will eventually lower inflation.

Additional summary information about the new law is available on the White House website.

If you have questions about the Inflation Reduction Act or wish to speak with a financial professional, contact Lane Hipple Wealth Management Group at our Moorestown, NJ office by calling 856-638-1855, emailing info@lanehipple.com, or to schedule a complimentary discovery call, use this link to find a convenient time.

Want to know the most relevant and timely financial planning news, strategies and opportunities every month?